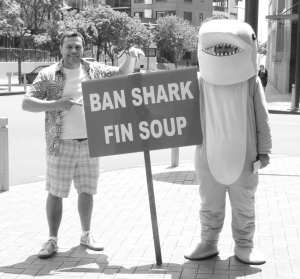 Just curious, do people use the fin for anything else? With all this focus on soup, we might be creating a generation of smarties who will conjure up shark fin jelly, sandwiches or vegemite and shark fin extract to side step this ban. We should ban shark fin harvesting full stop for whatever reason!

I’m surprised that the folk who relish this dish don’t actually eat the rest of it. As they’re very resourceful in consuming almost everything else that clucks, has 6 legs’ or oinks. Sure go ahead and regulate the hunting of sharks, but also why not eat the whole damn thing when you catch it.

Personally, I’m not fond of sharks because despite what people say they do look menacing, but I jot this down to my own ignorance. Surfboards with chomps in them, severed limbs and razor sharp teeth have fed my imagination and fears to heights beyond this planet. And I’m not going to face my fears by swimming or riding one.

I’m afraid for the day when protesters don signs reading, “Ban Cockroach Wing Soup”, by then we would really have scraped the bottom of the food chain barrel and we deserve to be punished. Hopefully, we would have changed the destructive path to our selfish culinary delights to more sustainable levels.

Cheerio, I have a can of shredded chicken to muscle open.