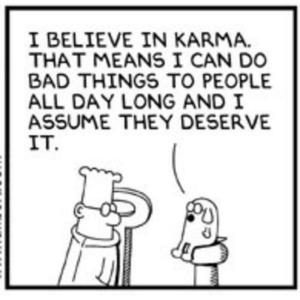 Well, they say, it’s a bitch and what goes around comes around. Over the past few years, I have battled with this concept thinking that I must have played one helluva practical joke or prank on someone influential in my past life. Frankly, I just don’t think Karma exists.

And how does Karma deal with those children who are subjected to abuse and violence?

And how does Karma deal with war and the effects on innocent people?

I think Karma was a sensible dictum instructing the mass not to engage in retaliations or revenge. Because we all know what happens when Peter hits Paul, well Paul gets angry and hits Peter back … next thing you know, rockets are fired over borders and tanks are rolling across fields.

Did you know that World War One was started when someone from one country shot an important (but less liked) person from another country. Rather than settling the score right then and there, one of them secured the backing of Germany, and the other called on Russia for support, then one month later they came together for a ‘great fisticuffs with bullets’ … other countries joined in, and four years later and well over 20 million lives lost, the war ended.

Shame the knowledge of Karma wasn’t as widespread in the western world as it was amongst the Hindu’s and Buddhist’s at that time.

I guess in the end, the ability to deal with setbacks – or outright failures – is really at the heart of a successful, and happy, person.

Over time and personally, I have found that some of life’s surprises can be really tough, and some people out there can be totally intolerable … but with the help from some truly good friends, a psychologist and the right ‘brain’ pills, you can indeed be treading along a happy place.